How to extend the life of your lithium-ion batteries

Lithium-ion batteries degrade over time, which is annoying to you and me, but very handy for smartphone manufacturers, who are all too keen to sell you a new one every two years. There are, however, ways you can look after your batteries to make them last longer, and this advice isn't restricted to just your phone.

A team at the University of Michigan, Ann Arbor, "plowed through scores of academic papers and manufacturers' manuals" to put together a list of best practices to preserve the life of lithium-ion batteries as long as possible. Almost every component of the battery degrades over time, including the anode, cathode, electrolyte, separator and current collectors. In a new study, the team identified several major factors that lead to battery degradation, all of which are avoidable.

Firstly, avoid exposure to high and low temperatures, especially during charging. If your phone is feeling hot on the charger, take it off. Likewise, avoid charging it in very cold conditions. Temperature extremes "can accelerate degradation of almost every battery component." For this reason, some electric car manufacturers recommend leaving the car plugged in on very hot days, so the battery cooling system can run. As a guide, try not to charge if the temperature is outside the range of 50-95° F (10-35° C).

Secondly, batteries hate being too full or too empty. Ideally, you'd never let them charge over 80 percent or discharge to less than 20 percent, because being outside the 80-20 percent range, on either side, stresses and degrades a lithium-ion battery. If you need the endurance of a fully-charged battery, then go ahead and do a full charge – but take the device off the charger straight away once it hits 100 percent. That means charging phones overnight, and leaving seldom-used batteries on the charger, are both bad news, so figure out a charging routine that's both convenient and kind to your cells.

Thirdly, avoid fast charging and discharging if you can. Fast chargers might seem convenient, but high currents will heat and degrade a battery faster than a slow trickle charge. The same goes for high discharge rates; power-hungry applications and full-throttle action in the vehicle world are not good for your battery, and will reduce its lifespan. If possible, get hold of an old-school, 1A slow charger for phones, and use that unless you really need to top up fast. 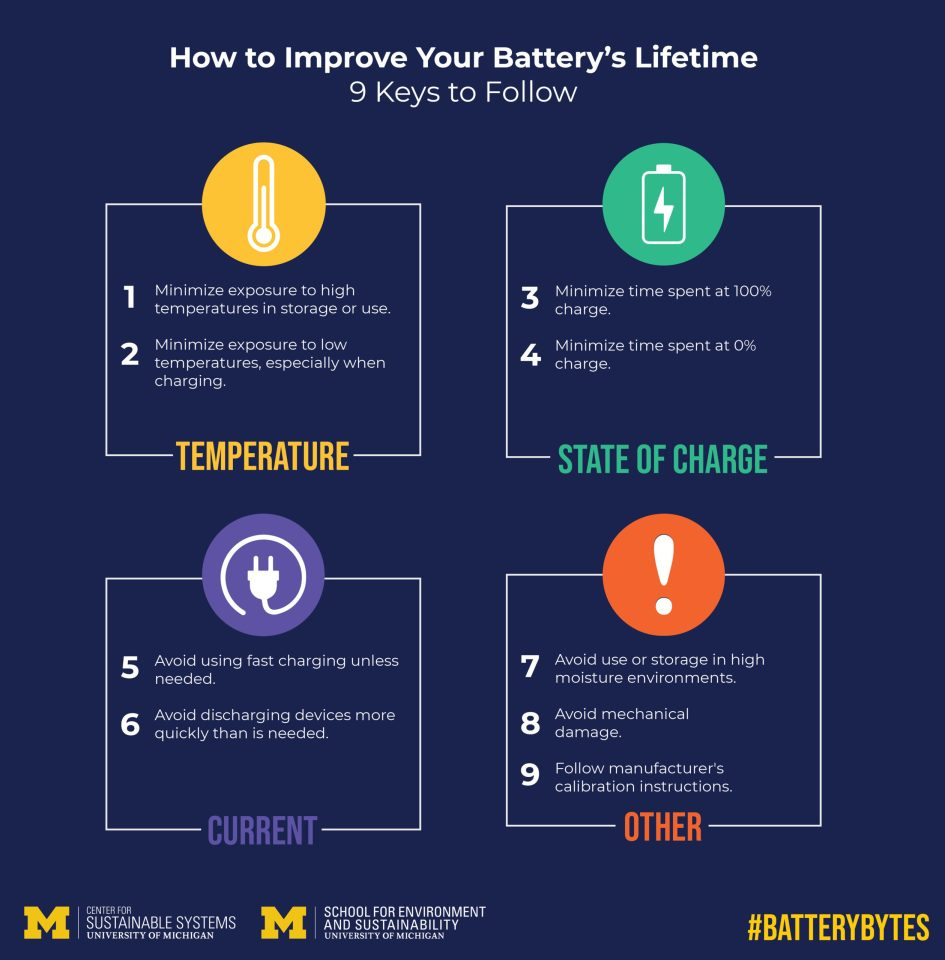 Finally, avoid using or storing lithium-ion batteries in moist environments, and "avoid mechanical damage such as punctures," which would seem fairly self-explanatory.

In short, watch the temperature, charge and discharge slowly, don't leave batteries on the charger, and try not to go above 80 percent or below 20 percent unless you need to. Not only will your batteries last longer, you won't have to replace them as often – and that's great for the planet in a number of ways.